Vienna has always been at the top of my bucket list of places to visit – and finally, thanks to a birthday treat from my daughter, my dream came true this year!

At the top of my list of places to visit was of course, the Spanish Riding School, Schloss Schönbrunn and an opera – just to name a few historical places.

However from a disabled traveller’s point of view, I would urge anyone travelling to Vienna to contact the relevant box offices well in advance.

I took my Go Go Elite Traveller scooter which by now has been around the world. It is easy to dismantle and goes easily into most car boots. However with one suitcase and a walker, it can make those boot spaces a bit tight so on this occasion at Vienna Airport, my husband popped the scooter seat on the passenger seat of the taxi. The taxi driver was really annoyed and claimed that the inside of his taxi was only for passengers and not for bits of equipment. I speak fluent German so told said driver that this was the first time that I had ever encountered such a negative response! I explained that we had been guided to his taxi by a taxi controller at the airport. I am glad to say that on our return trip, we had a delightful Persian taxi driver who on learning that I hadn’t managed to see the Danube, immediately put on the Blue Danube music as we motored back to the airport! 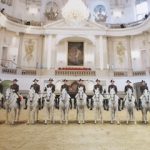 Access to most buildings went fairly smoothly although entering the Spanish Riding School complex was not straightforward.  The door where people exited from after the showings was shut on our arrival so my daughter had to find someone to assist. Initially there was no sign of a ramp – but finally one appeared.  As with most steep inclines, it necessitated me getting off the scooter as it got stuck at the top of the ramp.  Once inside the actual hall, I had to tuck myself in behind a row of fixed chairs – but due to space restrictions had to sit side-on to the show. Not the most comfortable position but the view was excellent so made up for the tight space.

Due to the short time we were visiting, we decided to use taxis to get about. For four people – plus the scooter – most trips cost us around 10 – 15 Euro which was about the same as if we were travelling by tram or metro.  It took around 25 minutes from the centre of Vienna to get to the Volksoper – the Staatsoper is much closer to the centre.